The High Stakes During Wildfires of California in Rural Areas

The increasing rate of wildfires in Northern California this year contributed to the chaos and disorganization during the evacuations, especially at ranches and farms. At Rancho El Pinto, located in Brentwood, fires frequently occur, horse owners and strangers alike had to rush to quickly and efficiently evacuate most of the horses.

On Aug. 16, the East Contra Costa County Fire Protection District sent out notifications for immediate mandatory evacuations around Marsh Creek Road to Deer Valley. Around 7:30 pm, fires started growing alarmingly, and  several small fires broke out around the hills surrounding the ranch.  Smoke covered everything around the barn and continued to get worse until the fires, driven by high winds, were directly across from the ranch.

Fires around Brentwood are not uncommon. Many people had experienced mandatory evacuations before where mobile homes had been set ablaze. No matter how frequent the fires, evacuations were disorganized and filled with chaos, leaving horses and people in disarray.

An assistant trainer at Rancho El Pinto, Hannah Rashyde, explained the process as a “very chaotic situation, messy, scary and lots of panicked people and horses”.

Rashyde was in charge of 12 horses out of many other horses on the ranch. The procedure was exhausting and the participants of the evacuation didn’t finish until 4 a.m. To evacuate the horses, they had to put halters on the horses close the back of stalls so they wouldn’t run away,and load them on trailers as well as helping other people.

The process of taking out and loading the horses may seem simple, but it was much harder than it sounds.

Some horses were much easier to handle. Others were forced to stay behind because of their incompetence to get into the trailer. Older and more well-trained horses were more cooperative than younger, less-experienced ones.

A 13-year-old thoroughbred named Rosie threw a fit and hit her head against the trailer and injured herself, but eventually went in even though it took six people to push her in. However, a few horses refused to enter the trailer and had to be left behind. Rosie’s case wasn’t the worst of it. A horse trainer, Melissa Cobb, led a filly into a trailer when someone shut the door on them, sealing the trainer’s exit. The filly freaked out and attempted to jump out the tiny window on the trailer, her legs dangling dangerously from the window. The filly might have died or might have had to be put down if she had broken her legs. But, the filly managed to safely get out of the window and both she and the trainer managed to leave unscathed.

“Our priority was to get the horses closest to the fire away as fast as possible … We took them to another barn in Brentwood,” Rashyde said as she safely took the 12 horses she was responsible for to four barns around the area. If time was running out and the fire threatened the barn, the horses would have to have been set loose with a metal name tag and run wild to escape. Despite a 50-50 chance the situation would have happened, the fire never touched the ranch. 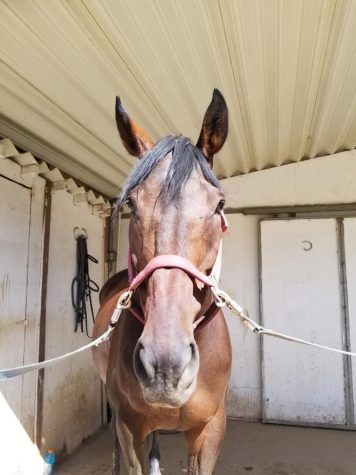 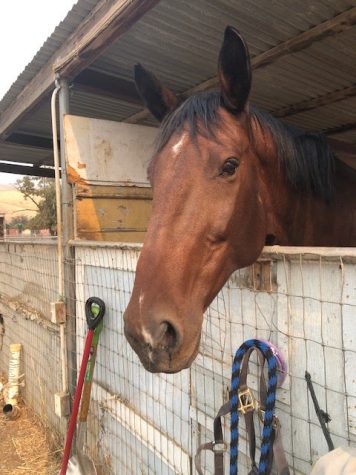 Once the horses were safely in a nearby barn, the atmosphere became more relaxed. Horse owners watched as horses were put together in a round pen and interacted with each other.

But in one case, a 13-year-old  thoroughbred named Jay was placed in a round pen with about four to five other mares who instinctively picked on him since Jay was the only male. A stallion with food aggression didn’t allow Jay to eat which caused Jay to be extremely nervous, requiring that he be hand-fed.

“He was more stressed and nervous … He would spook at the littlest things and was always looking around,” Jay’s owner, Sofia Kang, said.

After the threat had died down, the horses were brought back to their stalls in Rancho El Pinto and everything returned to normal, or at least, for most horses. Horses are naturally herd animals so the horses that were left alone had more anxiety compared to horses that were taken away.

Rashyde explained that “horses are instinctual animals. When they sense danger, they freak out … But they bounce back pretty quickly on the psychological stuff as long as they are in a herd.” For physical recoveries, it comes down to how severe the wounds were, but as long as they were treated properly, the horses should have been fine within a couple of weeks.

Although the fire danger had passed, heavy smoke continued to linger, causing more difficulty for the horses. Training had to be stopped. From this break, horses were likely to pick up bad habits from staying in their stalls rather than being worked and trained. The smoke also affected their health. It was like a blanket that covered everything from the horses’ eyes to their food. Many  got irritated by the smoke and were sneezing and coughing. Smoke can even be life-threatening if it gets into their systems, causing serious abdominal pain called “colic.”

Despite the mayhem from evacuations and the after-effects on the horses, Rashyde found the experience rewarding.

Rashyde said she’s still friends with the people who helped with the evacuations. To show their gratitude, she and another trainer sent out gift baskets to the barns that housed the horses during the fires.