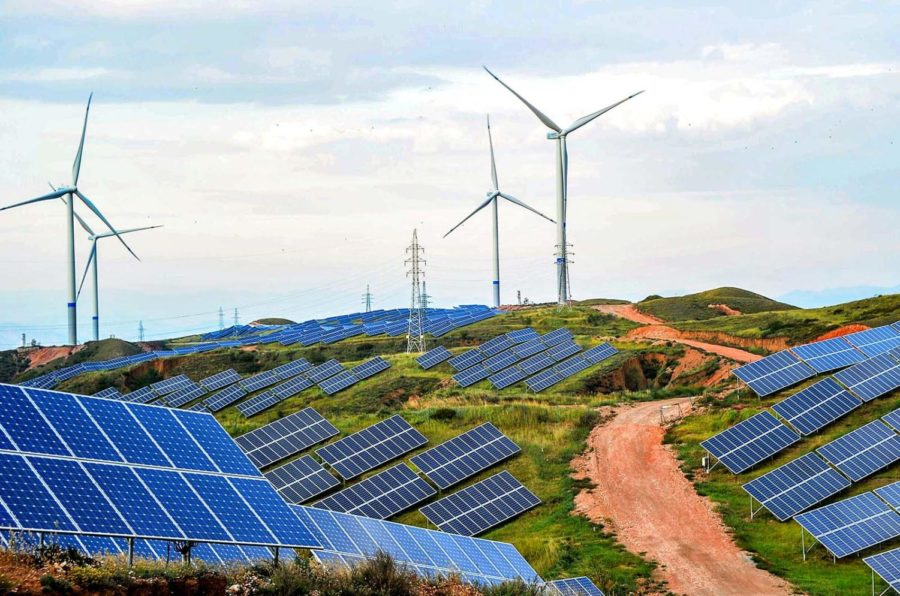 ZHANGJIAKOU, CHINA - JULY 02: Solar panels and wind turbines are pictured on a barren mountain at Shenjing Village on July 2, 2018 in Zhangjiakou, Hebei Province of China. The installed capacity of renewable energy electricity generation in Zhangjiakou has reached 12.03 million kilowatts. (Photo by VCG)

Changes in our planet’s climate are having huge impacts on many people and may continue to get more fatal if nothing is changed. Thankfully, there are many solutions that could help us diminish this problem before it gets too far out of control.

The “greenhouse effect” is a process in which the sun’s radiation reflects upon the surface of the Earth and bounces back into space, but due to the increase in greenhouse gases heat is trapped in the atmosphere. The result may be extreme weather conditions, hotter temperatures, and the flooding of coastal cities or towns.

Already there have been noticeable changes. Warmer temperatures have caused glaciers to melt, which has increased the overall sea level. Warmer climate and ocean temperature may also have a big impact on wildlife, which we need to prosper and live.

The burning of fossil fuels is a big contributor to the increase of greenhouse gases in the atmosphere. Burning coal, oil, and gas generates energy for cars, electricity, and industry. But all of this energy emits tons of carbon dioxide and is the Earth’s biggest source of greenhouse gases caused by human activity.

Renewable energy is one of many solutions that can help reduce global warming. This includes energy production through solar, wind power, and hydropower. This type of energy is clean and comes from natural resources, making it healthier for our planet. So instead of emitting bad gases into our atmosphere, we should try to gradually shift our energy production to renewables.

Solar is a source of renewable energy. This is when the heat from the sun is used to generate electricity. Using the sun’s heat for energy is clean and doesn’t emit bad gases into the atmosphere. In addition, clean energy would be healthier for society. Installing solar panels on roofs is less expensive since they generate their own electricity. As a result, solar could help turn around negative impacts on the planet.

Another alternative is using wind to spin turbines and produce electricity. It is a natural and clean source and results in fewer environmental problems than other energy sources.

Hydropower uses water to generate energy. When fast-running water goes through a turbine, and the kinetic energy is converted into mechanical energy, which then turns into electricity. This is a straightforward process that doesn’t require burning of fuel and therefore doesn’t create greenhouse gases.

Some believe that these renewable energy sources could still have negative impacts on the environment, such as habitat damage. Solar panels may be expensive, water dams may cause changes to ecosystems, and turbines could be unreliable. Although this may be true to some extent, minor problems can be fixed. The effects of greenhouse emission from fossil fuels will have greater negative impacts on our environment, causing irreversible changes to our Earth.

An organization called MCE works with 36 communities in four Bay Area counties to provide clean energy as an alternative to PG&E. Corporations like these are key to helping change our dominant source of energy.

Incorporating solutions sooner than later would be less costly and would save lots of money. Even if net costs to implement solutions may be high, the lifetime operational savings would make it worthwhile. So even though some problems may occur, it is safer to transition to renewable solutions and make them work before more complications arise.

There are many other solutions, including carpooling to burn less gas, using electric cars or bikes, and planting more trees, which take carbon dioxide out of the air. Changing to more of a plant-based diet would reduce carbon emissions.

People need to start coming together to develop beneficial and valuable ways to help our planet in today’s modern world, but society needs act. We need to make changes for the one planet we have before it is too late.