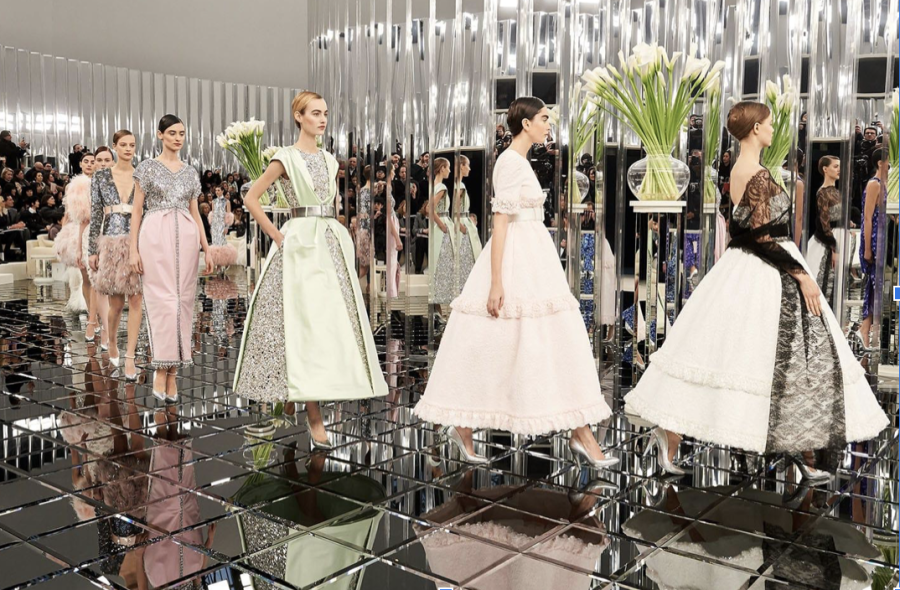 To many, Chanel is a household name for high fashion, especially in haute couture. When people hear the name “Coco Chanel,” they immediately think of the fashionable tweed suits, the iconic Chanel handbag, or Chanel’s signature No. 5 perfume. When Chanel was under the command of Karl Lagerfeld, he surely made Chanel’s shows unforgettable with jaw-dropping sets that ranged from an impeccable garden to glaciers to rocket ships. Furthermore, Lagerfeld furthered Chanel’s theme of femininity through stylish floral dresses, detailed skirts, and delicate embroideries. Everyone knew Chanel. Everyone loved Chanel. That is, until the artistic director changed.

When Lagerfeld passed away in 2019, Virginie Viard took the helm of Chanel as its new artistic director. Many mourned the loss of a great designer while others looked hopefully at Viard. Would she take Chanel in the same direction as Lagerfeld? If not, what was she going to change? Will she continue to create elaborate stages for the shows? By the time Chanel’s Spring 2021 Haute Couture collection was released, Viard’s reputation as a designer was already established.

One of Viard’s first collections was the Spring-Summer 2020 Ready-to-Wear show. Several A-list celebrities such as Anna Wintour, Cardi B, Jennie Kim, and Kristen Stewart, were all present and were decked out in the latest Chanel ensembles. Despite the stylish celebrities sitting in the front, the catwalk was drab. The setting depicted Paris from its rooftops so essentially, the models would look like they were walking on the roofs of Paris. Although it seemed like an innovative idea, the end product did not meet its expectations. After years of watching Lagerfeld’s fantastical stages, Viard’s interpretation of Chanel fell short. Furthermore, the garments presented during the show failed to impress. Sure, once in a while there was a beautiful ruffled skirt, fashionable hats, or alluring silhouettes but overall, the whole collection felt empty. Some argue that Viard’s vision was to create a self-made, confident, and smart woman but I’m not sure if this interpretation lives up to Chanel’s former glory, created by Lagerfeld’s vision of femininity and elegance. What was even more disappointing was that the most interesting part of the show was the runway crasher, YouTuber Marie Benoliel.

Although many people appreciate Viard’s new take on Chanel as she stepped back from frills and florals, replacing it with simplicity and a touch of glamor, most were not impressed with Chanel’s new look. Some media organizations expressed their disappointment in Chanel such as the article on the Washington Post titled “Chanel after Karl Lagerfeld is looking blah-despite a Paris runway crasher.” I was rather disappointed at this particular collection but had higher hopes for the haute couture collection. It turns out, the haute couture collection seemed to be worse.

Haute couture is the highest form of fashion in the world. It is the creation of garments that are specifically custom made for the client. Furthermore, each garment is made entirely by hand, thus establishing haute couture to be the highest level of craftsmanship and arguably the most labor intensive form of art in the world. Only about 2,000 women around the world can afford to dress this way since the sheer cost of the production may cost at least $100,000 and can go up to the millions. Chanel is one of the fourteen ateliers that create haute couture garments because the standards are incredibly high.

The latest Chanel show was the Spring 2022 Haute Couture collection. After a series of disappointing shows, I had hoped that this one would be different. It was not. When Lagerfeld was the artistic director, he would usually have a spectacular outfit at the end of each haute couture show that really made the audience go “wow!” Viard failed to meet the standards as she ended her shows with a simple white wedding gown that didn’t have the trademark Chanel glow (Fall-winter 2021 Haute Couture). Although the gown was most likely intricately made, simplicity isn’t always the way to go when it comes to the last outfit. It’s preferable to make a lasting impression that wraps up the whole show and yet I was neither wow-ed nor impressed by Viard’s final looks. The latest collection certainly also did not meet expectations, but only lowered Chanel’s reputation as an atelier. I wouldn’t be surprised to see Viard’s designs in any other atelier: there’s nothing inspirational about it.

Viard drew inspiration for the latest Chanel show from the 1920s since the 1920s emphasized fashion with an element of flair. Viard hoped to make this collection light and fresh for the summertime but I was thoroughly confused at this particular collection. I didn’t get the sense that this show was innovative or pure and the set of the show was also puzzling to me. Why were there random geometric shapes scattered around? Why was there a random horse starting out the whole show? Was it really necessary? What I really admired about Lagerfeld was his innate ability to present a show with cohesion. Each outfit preceded the one before with fluidity and the beautiful setting only enhanced the effect of each outfit. However, Viard decided to do a set with random shapes, give the models a black eye, and throw in a horse to start off the show. To me, I was unimpressed with this show from start to end. I was also wondering where the climax of the show was. Lagerfeld often started off the show simply with Chanel’s iconic tweed suits, designed in his own interpretation, but as the show progressed, the clothes escalated into something much more refined, complex, and beautiful. There was none of that in Viard’s latest collection. I felt like I’ve seen all the clothes before and there was nothing new to start a trend.

Viard’s recent collections for Chanel seem to be lacking in many aspects. For one, there doesn’t seem to be a connection between the designer and the collection. One could argue that Viard has only been the artistic designer for Chanel for a couple of years but even so, each collection feels noticeably empty. Although the sets of her shows can be grand (Fall Haute Couture 2021), there was a lack of energy and inspiration as I watched the show. Furthermore, Viard doesn’t seem to have an impressive aesthetic or theme in her shows. Yes, Viard seems to be going for the simple, smart woman aesthetic and yet it seems too predictable and boring. There’s only so much you can do with simplicity and minimalism. People used to watch Chanel for the new ideas that Lagerfeld brought and his designs were most often quite fantastical, but the same cannot be said for Viard. Finally, when I watch Viard’s shows, I see a lack of consistency. There is a theme for each show: the show might be based on Impressionism, the 1920s etc. However, I could only figure out what the theme was when I read Viard’s interview.

Fashion has been a long part of many people’s lives and although haute couture is something that most people can only dream of owning, the pleasure of admiring these beautiful garments is enough. Chanel’s haute couture outfits were especially inspiring because Lagerfeld always brought something new to refresh the eyes of his audience as well as to make them think about fashion in another way. Haute couture is the highest form of art there is and thus it must be entitled to the highest form of creativity. Designers are pressured to find something extraordinary and never-seen-before for their collections, which Chanel managed to accomplish every year until Viard took charge.

Fashion may be frivolous to most but to me and many others, it is a celebration of the finer things in life as well as the celebration of creativity. Haute couture represents the alluring indulgences that makes life meaningful. It adds a bit of color into our dull, monochromatic lives, even if we aren’t able to physically see it. Chanel’s interpretation of fashion is an expression that many relate to and can be a way of expressing ourselves. It tells others that you enjoy elegance and you have an eye for aesthetics. But after Lagerfeld passed away, so did the beautiful elegance of Chanel.

Viard is certainly far from a horrible designer. She can have good ideas, but the problem is that it’s not always consistent. Perhaps the onlookers and admirers of Chanel were spoiled by Lagerfeld’s ingenious sets and designs to the point where everything else pales in comparison. Lagerfeld had created such a vivid and impeccable culture for Chanel and set incredibly high standards for haute couture. In my perspective, Viard simply cannot live up to those high standards that her predecessor set. After all, everyone does have different tastes and styles but is there a better one? Perhaps we can agree that Lagerfeld’s interpretation of Chanel is much more pleasing and beautiful to the eye than Viard’s. All in all, the only emotion I feel after watching Viard’s shows is utter disappointment.

Hopefully, inspiration will strike and a beautiful show from Viard’s interpretation will emerge to defy my low expectations. Hopefully, Chanel will be returned to its former glory. Hopefully. 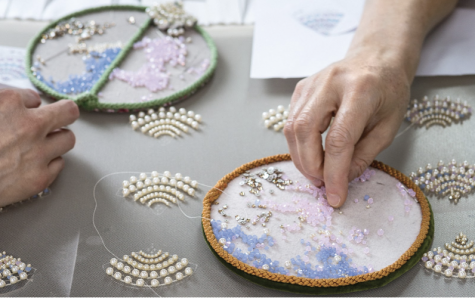 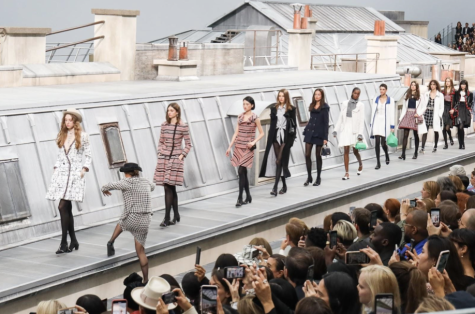