SRV grad competes on ‘The Voice’ 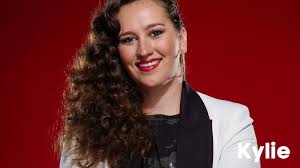 For 2010 SRV graduate Kylie Rothfield, it seemed meant to be. “If you believe in fate, that’s what it felt like,” Rothfield said in an interview with the SRV Journalism Club.

During Rothfield’s most recent appearance on “The Voice,” which aired Monday October 24, she performed and won the ‘knockout round.’ She now advances to the Top 20 where she will compete on the live shows.

“It’s like going to a really intense bootcamp. It has really pushed my range and my performance,” Rothfield said about her experience so far on “The Voice.” “Everyone involved in the show has been so kind. It sounds cliche, but I have become best friends with the other competitors.”

Rothfield’s love for music began when she was given a guitar at the age of 11. Her passion grew from there and eventually came to include singing when she joined Ken Abrams’ choir class as a freshman at SRV.

After Rothfield graduated from SRV, she attended Berklee College of Music in Boston, Massachusetts.  But in 2012, as she was trying to figure how to continue to pay for her education, she made the decision to move to Nashville, Tennessee and pursue music full time.

While in Nashville, she worked at a health food store during the day, and played at open mics at night looking for any and every opportunity to perform.

But in 2014 after finding success and signing a publishing deal, her voice collapsed. After a month of no talking, she was hesitant to get back into singing and found herself focusing on writing music for other people.

By 2015, Rothfield was anxious to get back to performing.  She was deciding whether to renew her lease in Nashville or move out to LA. And that is when she got the call to audition for “The Voice.”

Her success so far on “The Voice” has been exciting and overwhelming.  “I cry everytime she talks to me,” Rothfield said of working with Alicia Keys. “The experience is real and it has been invaluable.”

Students can watch Kylie Rothfield on “The Voice” which airs on NBC, Mondays and Tuesdays.