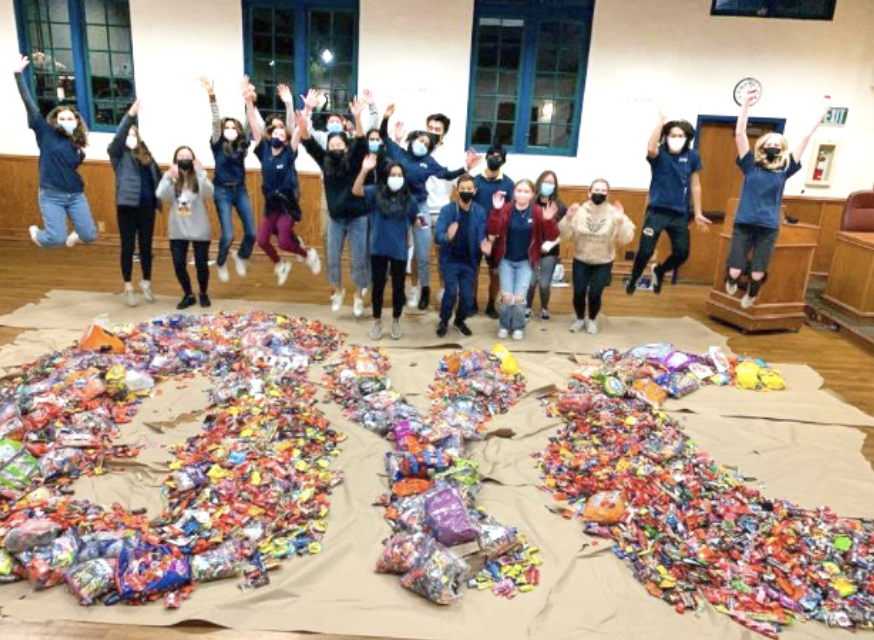 After the Danville Youth Council’s largely successful “Treats for Troops” candy drive, where they received more than 400 pounds of candy, the council now hopes to tackle the “Care Kits for Kids” project, which aims to help those who are homeless or foster children.

In past years, the council has completed numerous projects that benefited Danville. Most notably, the “Stronger Than Hate” art showcase was a huge success. The art showcase encouraged students to display art depicting equality and inclusion as a way to overcome hate in our community.

More recently, the council completed a candy drive for Halloween where candy would be sent to the Army. The council set up collection centers mainly at the Contra Costa County Library and advertised the candy drive on social media such as Facebook. The council also appealed to local schools to collect candy. After candy was collected, it was shipped to Texas to an office for the service group Treats for Troops, according to Monte Vista senior Matthew Cheong, who was in charge of this committee. Both Treats for Troops and Blue Star Moms worked to collect and distribute candy to the U.S. troops.

To make the projects happen, the council held a one-day retreat to discuss ideas, both for the fall and spring. All 27 members contributed ideas for the fall service project and voted on them. After deciding on the candy drive and “Care Kits for Kids” for fall, members split into two committees to represent the two projects. Now that the candy drive project is finished, the council is focusing on Kits for Kids.

The head of the Care Kits for Kids committee is Monte Vista High School sophomore Amelia Liptak. She said the goal is to create kits filled with necessities such as toothbrushes or masks for children through VESTIA — Volunteer & Emergency Services Team in Action. VESTIA, brought up by council member Sidney Hamblin, is based in Contra Costa County and aims to provide supplemental support for families in need.

Hamblin found VESTIA through a neighbor who works for the nonprofit. At the council’s first meeting for this committee, the goal initially was simply to find an organization to partner with them to make their “ideas come to life,” as Hamblin puts it. The Kits for Kids project also hopes to help those in need and provide a better quality of life with items such as travel toothpaste, shampoo bottles, sanitizer, lotions, socks, and backpacks. The collection of these goods would be done by setting up boxes, mainly at schools, so people can easily donate.

The council has posted flyers around schools and around town explaining the charity and posted information on social media sites in hopes of collecting as much as possible. Once the resources are collected, committee members will work to assemble the kits or send them straight to VESTIA for proper distribution.

Council members hope the implications of their Fall Service projects will be positive and make an impact on others’ lives. Member and San Ramon High sophomore Matthieu Fayet-Faber said that he is “overwhelmed with a sense of pride at what [they’ve] accomplished” and hopes that the care kits subcommittee will “truly make an impact on many lives.”

He said supporting others who are less fortunate than yourself is an act that everyone must contribute to. Fayet-Faber also praised the council and how involved each member has been. Each idea was considered, and once an idea was decided upon, everyone participated and worked to achieve the goal. Likewise, Hamblin said that this experience with the projects is  invaluable. She hopes that she makes a “child’s day brighter because of [their efforts],” even if it is only one.

After their Fall Service Projects, the council will focus on spring projects, which include Earth Day as well as mental health. The council hopes their efforts will galvanize others to do the same and help others in need.